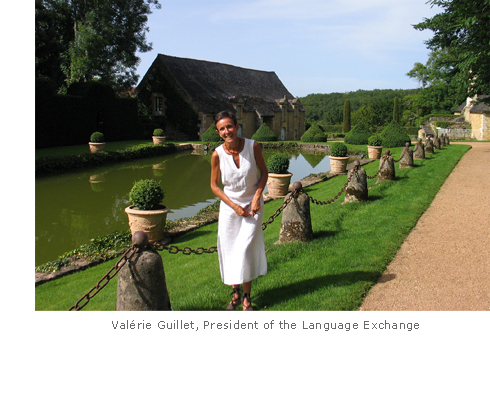 The Language Exchange was founded in 1992 and has been operated since by its current President, Valérie Guillet. A native of France and an avid language learner, Valérie had attended numerous language schools in several parts of Europe before coming to the United States. These first hand experiences triggered the desire to recreate the atmosphere she once encountered in those schools. They made her appreciate the value of instruction delivered entirely in the foreign language, with a total immersion approach.

“When your classmates are from Japan, Italy, the Czech Republic, and Switzerland… it is hard to ask the teacher to explain English grammar in a common language other than English! Therefore, all explanations were always given in the language we were studying. As a result, you would get a feel for the language structure, the culture in which it is embedded much faster than if you were constantly referring back to your native language. You would stop translating much sooner as you acquired reflex responses.”

These two realizations naturally led Valérie to found The Language Exchange with the goal of gathering foreigners with whom to share the gift of teaching others and doing it in the only way they knew would work, total immersion. Armed with a Master’s Degree in Business and Languages from the Université Jean Moulin Lyon III, France, and a Master’s Degree in Social Sciences with a concentration in translation from the University of Binghamton, NY, she opened The Language Exchange in beautiful downtown Portland, Maine.

The Language Exchange now employs about 15 instructors originally from countries as diverse as Japan, Peru or Irak (to name just a few,) and teaches 12 languages, including English, to both children and adults in group classes, private lessons, weekend workshops, and overseas language immersion programs.